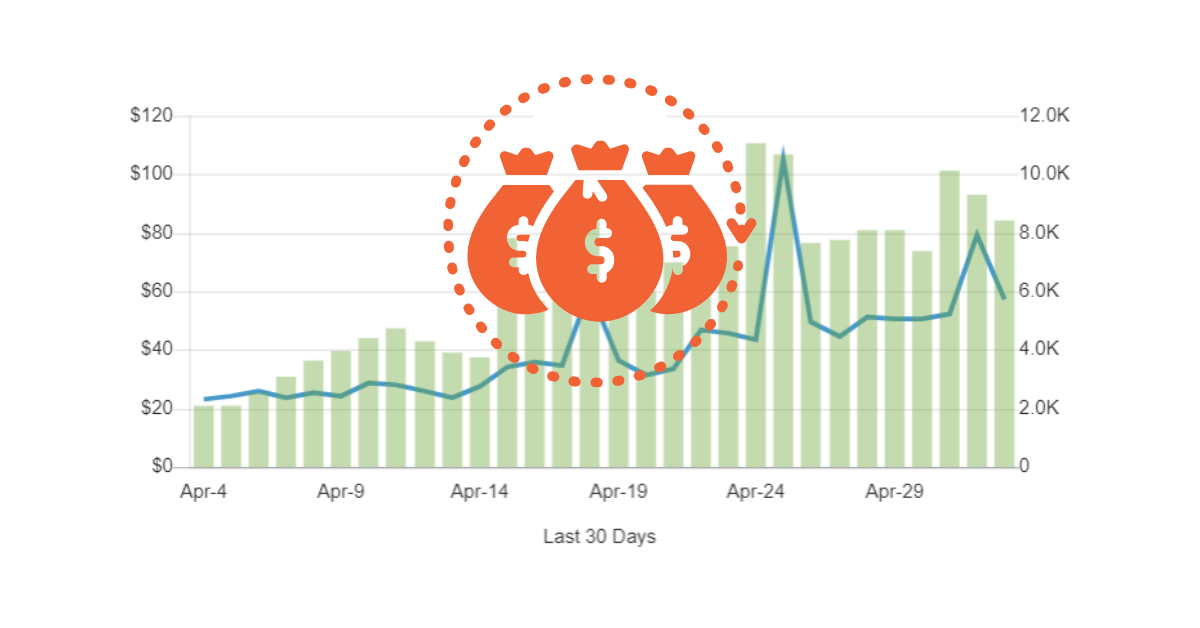 Update: we’ve updated the case study showing the comparison and growth of the site in the last 3 weeks. Spoiler alert: the growth is huge!

Let’s get into the case study!

The site is just 14 months old!

We started the site in February last year and started producing content in April last year.

Since then, we have published 380+ articles on the site.

Here is how we did it…

We also have a similar case study of another site of ours that is making $4000+ per month. And it is just 12 months old!

Contents hide
Summary: How We Did It?
Idea and Motivation
Traffic Growth
Revenue Overview
What We Learned

Summary: How We Did It?

Before we move on to the traffic and revenue numbers, let me give a quick summary of the approach we took.

Proper keyword research is by far the most important thing when it comes to building websites.

Whenever we build a site, we spend days, if not weeks, simply researching the niche and coming up with a long list of keywords to go after.

For every keyword, we:

After we make the keyword list to go after, the writing starts.

We believe (and our case studies confirm this) that publishing A LOT of content on the subject helps Google identify you as an authority in the niche.

This will lead to better (and maybe even faster) rankings.

So, what was the motivation behind this site?

To test the new approach for building sites. And earn some money, of course. 🙂

… and without any (minimal) link building in the beginning…

We wanted to see if we can go after a ton of keywords with low competition, write the articles fast, see them rank quickly, and monetize the site with the ads.

10-11 months later, we got the site to AdThrive, and in the first 30 days saw more than double what we expected.

In the process of finding the topics to write about, we used methods taught by Jim&Ricky from Income School and Morten, founder of the Passive Income Geek course (heads up, those are affiliates ;)).

Update (21 days after the last screenshot):

The site’s growth in the last 3 weeks was really good.

As previously mentioned, the idea was to publish a lot of content.

We aimed to write roughly one article per day.

The site was created in February 2020, and in the first few months, we published just ten articles and wanted to give up on the case study.

The reason for that is we were writing the articles ourselves, and we just didn’t have the time to do it.

Two months later, in April 2020, we decided to give the articles to our writers to start producing a lot of content and see how it will work out.

Here is the number of articles published on the site month by month:

You are probably wondering how things played out through months.

Let’s take a look at the traffic growth of the site.

Despite the impressive numbers the site is pulling, its growth is even more impressive.

Here is the month by month comparison of the site’s pageviews:

This is a 66.85% increase in users compared to the last month!

Here is how the traffic on Google Search Console looks now:

Update (21 days after the last screenshot):

The first 6-7 months are a ghost town… as it usually is.

Here is an overview of the pageviews by months:

It took us a year to get to 100k pageviews per month. Pretty awesome! 😀

And here are the numbers from the last month:

The traffic growth is not bad. 🙂

This leads us to the probably most interesting part for you…

The main goal for this site was to monetize it with ads.

Although we have some Amazon links there, the focus is not on selling affiliate products.

Once the site reached 30k (threshold for additional sites) pageviews per month, we monetized it with AdThrive.

Taking the time of the year and time on AdThrive into consideration, the RPM should be increasing in the upcoming months.

There are ways to build a good passive income site without it being the affiliate one.

… and this case study shows that!

After reading this case study, are you interested in learning more about how we did it first hand?

Join our Facebook group where we and people with similar interests and knowledge share valuable tips for growing your site:

Join Facebook Group
We use cookies to ensure that we give you the best experience on our website. If you continue to use this site we will assume that you are happy with it.OkPrivacy policy